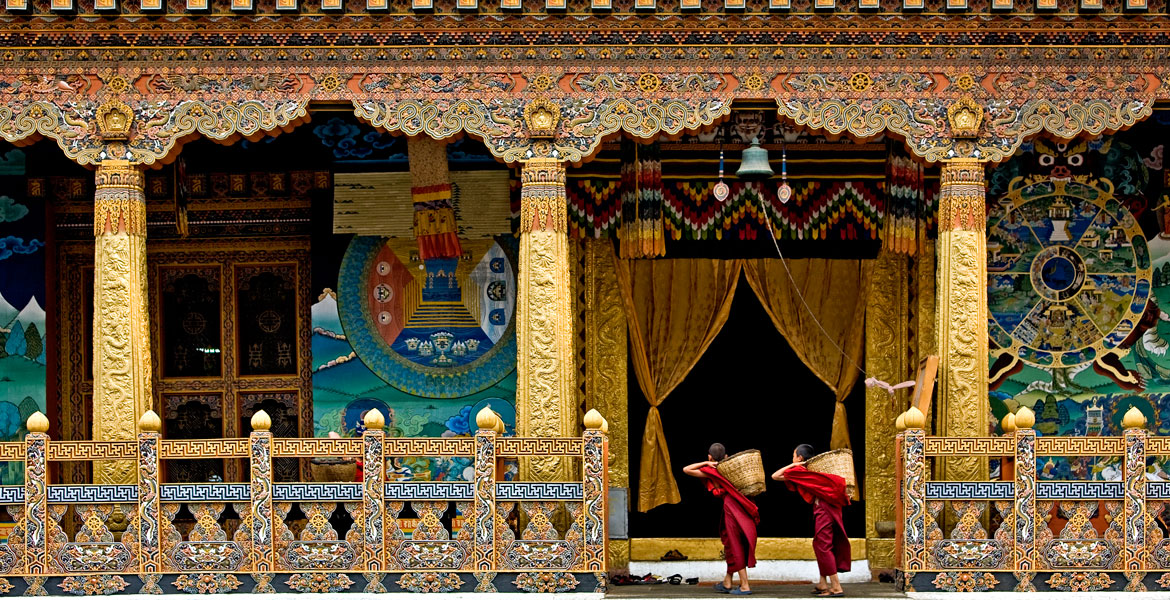 The flight to Paro is one of the most spectacular in entire Himalayas. Whether flying along the Himalayan range from Kathmandu or over the foothills from Kolkatta, the journey offers fascinating views and an exciting descent into the Kingdom. Bhutan’s first gift, as you disembark from the aircraft will be cool, clean fresh mountain air. After immigration formalities and baggage collection, you will be met by our representative, and afterwards transfer to the hotel.

Situated in north-western part of the country, the enchanting valley of Parois rich in culture , scenic beauty and abounds in myths & legends. The valley is home to many of Bhutan’s oldest temples and monasteries, the country’s international airport and the national museum.

Afternoon visit to Rinpung Dzong, meaning (‘fortress of the heap of jewels’), which has a long and fascinating history. Along the wooden galleries lining the inner courtyard are fine wall paintings illustrating Buddhist lore such as four friends, the old man of long life, the wheel of life, scenes from the life of Milarepa, Mount. Sumeru and other cosmic Mandala. Part of Bernardo Bertolucci’s movie, ‘Little Buddha,’ was filmed inside this dzong.

Then drive to 7th century Kyichu Lhakhang, one of the 108 temples built in the Himalayas by Tibetan King, Songtsen Gampo. The building of this temple marks the introduction of Buddhism in Bhutan.

Evening an exploratory walk around main street and market area.

After breakfast, embark on a walking excursion to Taktshang Monastery (approx. 5 hours, round trip walk).Taktshang is one of the most famous of Bhutan’s monasteries, perched on the side of a cliff 900m above the Paro valley floor. It is said that Guru Rinpoche arrived here on the back of a tigress and meditated at this monastery and hence it is also called ‘Tiger’s Nest’. This site has been recognised as a most sacred place and visited by Shabdrung Ngawang Namgyal in 1646 and now visited by all Bhutanese at least once in their lifetime.

Later in the afternoon, drive end of the Valley to the base of Drukgyel Dzong, a 17th century fortress burned down in the early 1950s. Here we will also see the beautiful typical farm house. Bhutanese farmhouses are very colorful, decorative and traditionally built without the use of single nail. The majority of the population of Bhutan continues to live as it has for centuries – in small isolated farms and hamlets, surrounded by terraced fields of rice, maize and buckwheat.

After breakfast, drive to Punakha, the old capital town of Bhutan with en-route stop at Chuzom, the confluence of Thimphu and Paro rivers. Three different style of stupas ; Tibetan, Nepalese and Bhutanese adorn this confluence. Shortly before reaching Chuzom, you will see on your left Tschogang Lhakhang, ‘the temple of the excellent horse’. It is a private temple, built in 15th century, as the result of visitation from Balaha, the excellent horse, a manifestation of Chenrezig, the compassionate Buddha.

At Dochula Pass, 108 chortens or stupas known as Druk Wangyal Chortens have been built by Ashi Dorji Wangmo Wangchuk, the eldest Queen Mother. These chortens are built in three layers, the first lowest level layer has forty five chortens, the second has thirty six and the top layer has twenty seven, built around the main chorten.

Then explore some part of Royal Botanical Park. It is the first botanical park in Bhutan and forms the backdrop of the Dochula Pass.

Until 1955, Punakha served as the capital of Bhutan and even today, it continues to be the winter residence of the central monk body. Blessed with a temperate climate and fed by Pho Chu and Mo Chu rivers, Punakha is fertile valley with abundant crops from terraced rice fields, seasonal fruits and vegetables. Adjoining to Punakha, Wangduephodrang known as Sha or ‘east’ to the Bhutanese is an important gateway to the far-flung corners of Bhutan. Wangduephodrang played a crucial role in unifying the western, central and southern districts.

Afternoon visit Punakha Dzong or (‘Palace of Great Happiness’), built at the junction of the Phochu and Mochu rivers in 1637 by Shabdrung Ngawang Namgyal. This majestic dzong served as both the religious and the administrative centre of Bhutan in the past. It measures some 600 by 240 feet and has a six-story, gold-domed tower. Inside are courtyards and religious statuary that hint at the depth of history and spiritual tradition embodied here. Your guide will illuminate your understanding of this intricate culture that is exotic to us, though long established here.

Then a short excursion to Chimi Lhakhang.
The Chimi Lhakhang, situated on a hillock in the centre of the valley, also known as the temple of fertility. It is widely believed that couples who do not have children and wanting one, if they pray at this temple, they are usually blessed with a child very soon. The trail leads across rice fields to the tiny settlement of Pana, meaning ‘field’. A walk through the village near the temple will give you rare glimpses into the daily life and lifestyle of the villagers.

Overnight at the hotel in Punakha / Wangduephodrang. (Altitude 1300m)

After breakfast, visit Sangchhen Dorji Lhuendrup Lhakhang. Perched on a ridge amid pine trees and overlooking valleys of Punakha and Wangduephodrang, gleams this impressive structures of Sangchhen Dorji Lhuendrup Lhakhang (temple). The temple houses a 14-foot main bronze statue of Avalokiteshvara (Chenrigzig chagtong chentong). Other statues include those of Guru Padmasambawa, Gautama Buddha, Zhabdrung Ngawang Namgyel, Tsela Namsum, the 21 Taras and Tsepamay (Buddha of longevity). The Avalokiteshvara statue, one of the biggest in the country, was the handiwork of entirely local Bhutanese artisans.The temple complex also houses a permanent higher learning and meditation centre for nuns where, apart from religious trainings, it provides life skill training such as tailoring, embroidery, statue making and thangkha painting.

Thereafter a beautiful hike (total about 2 hours round trip walk) takes you to the regal Khamsum Yuelley Namgel Chorten, which was built by the Queen Mother of Bhutan to remove negative forces and promote peace, stability and harmony in the changing world. The Chorten dominates the upper Punakha valley with commanding views across the Mo Chhu river and up towards the mountainous peaks of Gasa and beyond.
Post lunch, drive to Thimphu stopping briefly atDochula pass. Thimphu has been capital of Bhutan since 1955 and seat of government, religion and commerce. It is an unique town with harmonious mix of modern development alongside ancient traditions.

On arrival in Thimphu, check into the hotel. Then an exploratory walk around Thimphu city centre. Also visit the Local Crafts Bazaar, to browse through example of Bhutan’s fine traditional arts. Here you can buy hand-woven textiles, thangkha paintings, masks, ceramics, slate and wood carvings, jewellery, interesting items made from local materials.

After breakfast, sightseeing in Thimphu valley including visit to the following : the National Library, housing an extensive collection of priceless Buddhist manuscripts; the Institute for Zorig Chusum(commonly known as the Painting School) where students undergo a 6-year training course in Bhutan’s 13 traditional arts and crafts, Textile Museum; established in 2001 and showcases range of beautiful Bhutanese textiles, Folk Heritage Museum; providing a fascinating insight into the traditional Bhutanese farmhouse and rural past through its exhibits.
After lunch, visit to Changangkha Lhakhang. It is a fortress like temple and monastic school perched on a ridge above Thimphu, south of Motithang. The temple was established in 12th century on a site chosen by Lama Phajo Drugom Shigpo, who came from Tibet. The central statue here is Chenrezig in a manifestation with 11 heads. From temple courtyard, there is fascinating view of Thimphu valley.
Afterwards drive to Buddha Point (Kuensel Phodrang). You can pay your obeisance and offer prayers to the Buddha, the largest statue in the country and then walk around and take a glimpse of the valley.

Then visit, King’s Memorial Chorten continuously circumambulated by people, murmuring mantras and spinning their prayer wheels. Construction of this landmark was the idea of Bhutan’s third king, His Majesty Jigme Dorji Wangchuk (‘the father of modern Bhutan’) who has wished to erect monument to world peace and prosperity. Completed in 1974 after his untimely death, it serves both as a memorial to the Late King and as a monument to peace.
Conclude the day with visit of Trashichhoedzong. This impressive fortress/monastery houses Secretariat building, the throne room of His Majesty, the King and various government offices. It is also the summer residence of Chief Abbot and central monk body.

After breakfast, drive to Bhutan’s border town Phuentsholing. Five miles from Thimphu, en route visit Simtokha Dzong, the oldest fortress of the country built in 1627 which now houses the School for Buddhist studies.

Thimphu – Phuentsholing road was built in 1962 by Dantak, the Indian Border road organization and it is a fascinating drive with numerous scenic spots en route.

Phuentsholing is a thriving commercial centre on the northern edge of the Indian plains. Situated directly at the base of Himalayan range and sharing border with India, Phuentsholing blends in the fascinating mix of Indian and Bhutanese cultures.

4 km before reachingPhuentsholing, visit Kharbandi Gompa, the beautiful monastery situated in garden of tropical plants and flowers. The monastery contains paintings depicting scenes from the life of Buddha and statues of Shabdrung Ngawang Namgyal and Guru Rimpoche. From the monastery garden there is a splendid view of Phuentsholing and plains of West Bengal (India) and their tea gardens beyond.
Evening take a stroll around Phuentsholing town and visit Zangtho Pelri,the temple situated in city centre, representing the heaven of Guru Rinpoche.

Overnight at the hotel in Phuentsholing. (Altitude 300m)

After breakfast,picked up by Indian counterpart from Phuentsholing hotel and proceed for onward program.